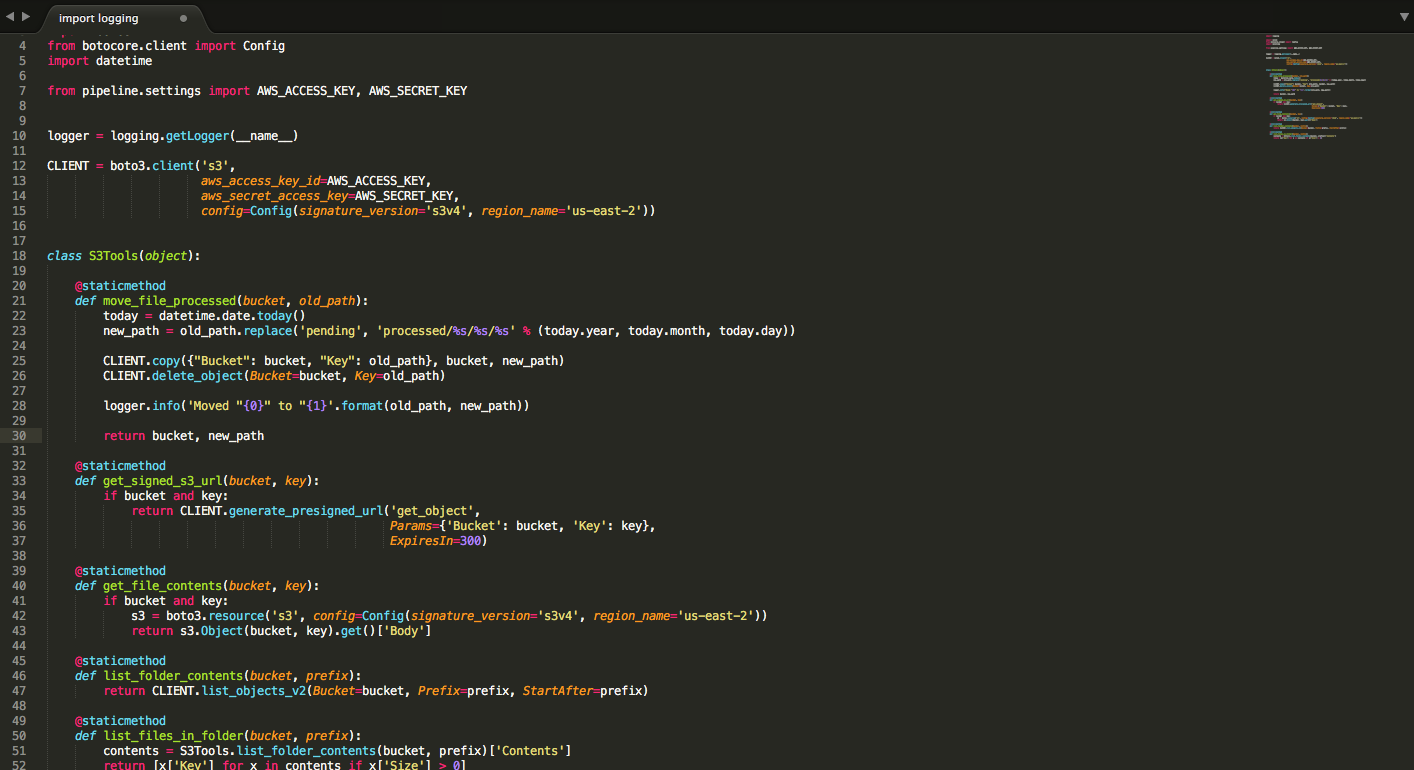 Build a data pipeline application with Python and Celery, to automatically update Amazon Redshift database tables from CSV files in an S3 bucket.

In this post I'm going to describe how to set up a simple mechanism for pipelining data from CSV files in an S3 bucket into corresponding Redshift database tables, using asynchronous Celery tasks and Celery's task scheduling.

The basic idea here is that you have a database table in Redshift that you use for some other application (maybe you read data from the table into Tableau, for example), and you need to keep it continually updated from some other data source. Let's further suppose that data from this other source periodically shows up in a CSV file in an S3 bucket from which you can access it. (This scenario might sound familiar to certain retail analysts, for example.)

This toy app provides a simple example of a scalable pipeline mechanism for ingesting a single CSV schema into a matching database table. It is straightforward to scale this method up to many separate tables, updated from the matching CSVs. Furthermore, this approach can potentially handle both very large files, and a high degree of processing concurrency.

How To Run The Application

Note that this post is about the data pipeline app itself, not setting up the AWS infrastructure (though we might cover some of that in a future post, so stay tuned). I'm going to assume that you have the following prerequisites:

The code is available here: https://github.com/loftylabs/s3-to-redshift-pipeline. You'll need to update the project settings to the appropriate values, as described in the readme.

For a simple example of a data schema, I used the training file from the Kaggle Titanic Data Set, and I'll refer you there for a description of the data. It's a pretty straightforward CSV. As we'll see shortly, I designed a simple database table matching this schema in which to load the data. In order to make the file work with the SQL COPY command that loads the data, I had to remove the first line in the CSV (the column names). I included the modifed file in the code repository.

A few notes about this:

You will need to get the data file into your S3 bucket one way or another. You can just use the AWS Console for that. Or, if you have the AWS CLI client set up, you can run (I used a bucket called sa-data-pipeline-2):

This command is perhaps overkill here, but it's handy when you have a lot of files to upload at once.

Create the Table with a Flyway Migration

Before loading the data, you'll need to set up your Redshift table. Flyway is a handy way to do this (I just downloaded and extracted the Command Line tool bundle, without JRE, here, and threw away the stuff I didn't need).

In the s3-to-redshift-pipeline/redshift/sql folder, you'll find a file named V1__initial_tables.sql with the following contents:

First make sure that you set the flyway.url in the flyway conf file as explained in the repo readme, then run:

Note: You don't have to use Flyway for this, it's just a handy way to manage database migrations so I included it here. If you have another convenient way you prefer to run SQL against your Redshift database that will work fine too, just run the CREATE TABLE statement above.

Before you can run the app you'll need to update the settings as described in the readme:

You'll also need to have Python 2.7 and Virtualenv installed in your development environment.

Once you have all that set up, you can get the app up and running with:

Note: I installed ipython because I like using it, but it's definitely not required for this app, and comes with lots of dependencies. If you want to keep your virtualenv clean, this is all you really need:

Once your virtual environment is set up and ready to go, you can run the app with:

Note: For local development and testing purposes, I usually find this command a bit more helpful:

In this post we walked through setting up the app and getting it to work. The code is available on Github, so feel free to download play with it. Let us know if you have any questions in the comments section below.

In a future blog post I will go through the code in some detail, and explain some ways it could pretty easily be extended.

Did you know? Lofty builds data-driven applications for disruptive companies.